40% off for the first 3 months with this code: OMNIBFCM40 Available until Jan 1st

Omnisend Pricing – Which Tier is Best For Your Ecommerce Brand?

Omnisend Pricing - Which Tier is Best For Your Ecommerce Brand? 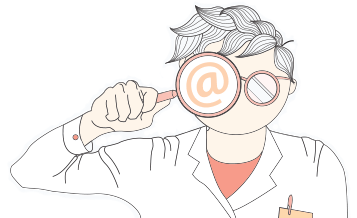 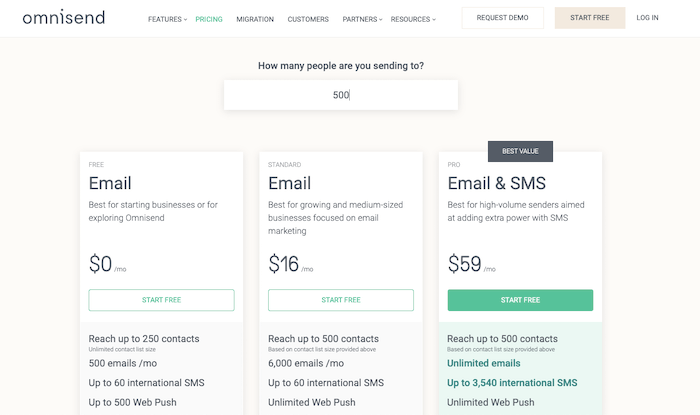 How Much Does Omnisend Cost?

Omnisend is an all-in-one marketing automation platform built for ecommerce brands. It lets you automate your marketing processes with growth as a goal.

Since businesses will have different needs at each stage, Omnisend offers several pricing plans: Free, Standard and Pro.

The three tiers offer virtually the same set of features, what changes are how many emails and SMS you can send and to how many people.

What is the difference between the Standard and Pro plan?

The Pro plan comes with everything that Standard does, plus unlimited emails and a higher SMS allowance. In terms of features, the only thing that really changes is that the Pro plan allows you to add a custom domain signature, which could help improve your deliverability

So when might you opt for the Pro plan over Standard? If you send a lot of SMSs, then you’d be better off with the Pro plan. For $59/month, you’ll be able to send up to 3,540 international SMS.

All plans include credits in the cost of the plan, but you can always purchase more at a fairly reasonable price:

Is Omnisend Free to Use?

The Free plan comes with unlimited contacts and 500 emails/month, though you’ll only be able to reach a total of 250 contacts.

A free plan might work for you if your brand is just starting out. After all, all features are included, even custom workflows, segmentation and unlimited landing pages. The fact it comes with unlimited contacts is particularly appealing, but you’re likely to outgrow the sending limit fairly quickly.

While Mailchimp is one of the most popular email marketing tools out there, the company’s decision to stop native integration with Shopify was a deal-breaker for many ecommerce brands, and many turned to Omnisend as an alternative. We’ve broken down the features and pricing, so you can decide which tool is better for your business.

Automation is where Omnisend really shines. While Mailchimp lets you automate some parts of the flow (like abandonment), Omnisend’s advanced features are truly built for ecommerce. It lets you set up conditionals, SMS, Facebook Messenger and push notifications right in the same visual flow. The fact that Omnisend offers gamification is also an advantage.

Mailchimp’s plans have more limitations in terms of features, but it might be fine if your brand is just starting out. Omnisend includes all features on its free plan, so it’s worth giving it a shot if you send few targeted emails and would benefit from advanced ecommerce focused automations, for example. It’s made for growth and offers plans that grow with you and your business.

Once you move onto an Omnisend paid plan (because you want to send higher email volumes, for example), you’ll see that there isn’t much difference between Omnisend and Mailchimp’s prices.

While there are plenty of email automation services out there, Omnisend is a key one that’s made for ecommerce and focused on growth. With its easy-to-use platform, advanced options, and flexible pricing tiers, it’s a good choice for those focused on growing their ecommerce brand.

Omnisend’s paid options are great for personalizing campaigns and targeting customers with the products that interest them. If you’re not ready for a paid option, its free plan is generous enough for small businesses, so you really have nothing to lose by trying it out.

Have you tried Omnisend? Let us know what you think in the comments below.

Is Omnisend free to use?

Omnisend offers a free plan, which comes with 500 emails and unlimited contacts (though you can only reach 250 of them).

How do I use Omnisend with Shopify?

Integrating Omnisend with your Shopify store is pretty simple. Set up an account with both platforms. Add the Omnisend app in the Shopify app store and register your Omnisend account from Shopify admin.

Is Omnisend better than Mailchimp?

That depends on what you’re looking for. If you’re looking for an email marketing tool for ecommerce, Omnisend is really worth considering due to its ecommerce specific automations. See how the two compare in the Omnisend vs Mailchimp section above.

YOUR QUESTIONS AND FEEDBACK

We use cookies to ensure that we give you the best experience on our website.OK